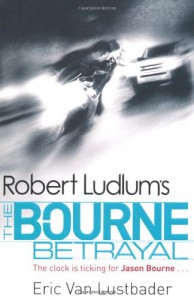 [a:Lustbader|39467|Eric Van Lustbader|https://d202m5krfqbpi5.cloudfront.net/authors/1262658121p2/39467.jpg] manages to write both compelling prose and utter shite at the same time. You could call him the [a:Dan Brown|630|Dan Brown|https://d202m5krfqbpi5.cloudfront.net/authors/1206553442p2/630.jpg] of the thriller world; if Brown hadn't already got that title sewn up himself. Since [a:Robert Ludlum|5293|Robert Ludlum|https://d202m5krfqbpi5.cloudfront.net/authors/1208465267p2/5293.jpg]'s death, Lustbader has been at the helm of the Bourne series of novels. Taking the original trilogy and, some might say, milking it for whatever he and the Ludlum estate can get. This book continues in that vein and feels a lot like Lustbader had the beginnings of a great idea for a stand-alone novel but was already committed to that pesky Bourne cash-cow, without any ideas for that. So, he decided, why not just crow-bar the burgeoning plot ideas into the novel you've already got the advance for? Perfect.

[b:The Bourne Legacy|16173332|The Bourne Legacy (Jason Bourne, #4)|Eric Van Lustbader|https://d202m5krfqbpi5.cloudfront.net/books/1353965097s/16173332.jpg|2517460] should have alerted us to Lustbader's penchant for the ridiculous – as Khan turns out to be Bourne's long lost (believed dead) son – and in this sequel, [b:The Bourne Betrayal|7738044|Robert Ludlum's The Bourne Betrayal (Jason Bourne, #5)|Eric Van Lustbader|https://d202m5krfqbpi5.cloudfront.net/books/1348716473s/7738044.jpg|1173089], we're asked to believe that Bourne (a man with a history of memory loss and documented paranoia/trust issues) lets a doctor he's only just met inject his brain with 'memory healing nanites' and that an Islamic terrorist would be able to convincingly replace the head of a secret US anti-terrorism task-force – without anybody noticing; not even Bourne, his best friend. Truly incredible.

In fact, this magical ability to appear to be somebody else is the central point of the story. Both Karim al-Jamil and Bourne are described as chameleons: one able to fool an entire government department of professional spooks; the other able to fool a tight-knit terrorist cell. This is counter-balanced by Bourne's ability to, once he's realised he's been fooled by the fake Lindros, suddenly work out every tiny detail of the terrorist plot, immediately and, with no real evidence at all. He is the perfect spy I guess after all.

As I already own the next three Lustbader novels in the series, I'm almost certainly going to keep going. But these books are increasingly looking like they should be for Bourne completists only.
Tweet