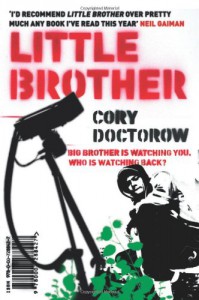 Little Brother is the story of a group of school friends in San Francisco, caught up in a terrorist attack against the city. In the wrong place at the wrong time they are scooped up by the Department of Homeland Security for questioning. The department's approach turns out to be a little extra-legal, and before they know it they are being held in a secure – Guantanamo-like – facility in the bay. Having already been held, without even telling their parents, for several days they can't just be released, and they are threatened further to keep them quiet. Once out, the San Francisco they are released into is one they barely recognise. With the DHS running and influencing almost everything there is no freedom to question anything anymore. Luckily, our hero Marcus, is determined to fight the DHS and get things back to the way they were.

Doctorow is an obvious Libertarian, and this novel is a good, young-adult, primer. The Department for Homeland Security is the over-powered evil authoritarian regime. The rest of the city are easily duped into accepting the occupation of their city – because, you know, Terrorism! Marcus and his friends are the hackers, free-thinkers and underdogs; determined to overthrow something for what was done to them: to right the wrongs. The perfect teenage rebellion fantasy. Not only does Marcus have the ideal organisation to rebel against, but he has the skills and tools to do so. While the politics gets a little obvious in places, Doctorow is obviously trying not to make this just a libertarian tract. Luckily, he has a pretty exciting story to tell and I still have no idea why I gave up on this the first time...
Tweet