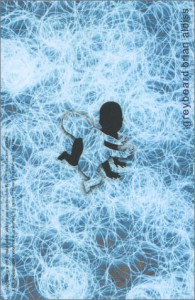 Waterstones had a display of books set in London and we bought a few. I think this is the last one I had left to read, only to discover that the book isn't set in London at all. London features heavily in the book as somewhere they want to get to — in fact they want to get through London and out to the coast — but starting west of London they never quite make it. That said, their quest to reach London still makes the city feel like a character. Just out of scene, aspirational, but a character that they keep searching for and referring to.

48 years before a test explosion in space leaves the whole world sterilized. Once the sickness settles down and the radiation deaths slow down the world is left with an ageing population – an ageing population that can't have children. Algy and Martha were just children during the year of sterilization. Now, in their 50s, they are the youngsters in their community. Their leaders are increasingly old and increasingly paranoid, so they decide to take off, head down the Thames, and try and get to London, then hopefully onto the coast beyond.

Aldiss presents the touching tale of the travels of this group, as they pick up a handful of other disaffected community members on their way out, the story is also interspersed with flashbacks as we find out about Algy's and Martha's childhood meeting and their time in Douche (Documentation of Contemporary History – England). More touchingly, we come to understand how important the lack of any children has become to these people. As they grown older there is no one to look after them, as they die there will be nobody to replace them. Everybody lives with the knowledge that, as a species, we are dying out. Phantom pregnancies, rumours of freak shows of deformed half-human children, and con-men offering all sorts of life extending treatments all seem to spring out of this desire for things to be different. Even Douche itself is the vain hope that humanity needs to make sure there is some legacy, even if it's only information, to leave for the children that everybody hopes will come again if the radiation levels fall and somehow the sterility is reversed before they're all too old to even have children, let alone raise them.
Tweet