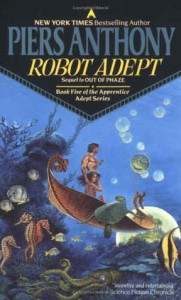 The underlying theme is the same: Mach has found himself in Phaze, in Bane's body, and Bane, in turn, has found himself in Proton in Mach's body. Rather than the physical transference of the first trilogy, this continues with the psychic link only instead. To up the game from the previous novel though, this time, an attempted body-switch while embracing their respective partners means that they can now transfer them as well. Cue an almost French-farce type feel to the story as characters rush from one world to the other, having sex with the right partner in the wrong body, or the wrong partner in the right body, or frequently the right partner in the wrong body and a non-human form. Yes at one point, Anthony's adolescent preoccupation with sex means that two characters with shape-changing abilities have to have sex in all three of their forms (at least he doesn't take the next step and write actual bestiality).

Again, the game of Proton is a fixed method for every story resolution – this time a game has to occur half in Proton and half in Phaze (for no reason that's every adequately explained). How the two sides are suddenly able to coordinate when we've been told that Mach/Bane are the only contact though is swept under the carpet (either Bane or Mach even wonders about how that works at one point). And finally, as if the repetition of themes and devices wasn't enough, each time the story switches point-of-view character Anthony feels the need to recap the chapter that we've just read from the new character's point of view. Hang on – all three of us were there in the last chapter. I already know what happened, I just read it!

Somehow, something about the series still hooks me though. I suspect it's more a nostalgia for how much I enjoyed the first trilogy when I also had an adolescent preoccupation with sex, but hopefully there's more to it than that. At least there's only two more to go...
Tweet