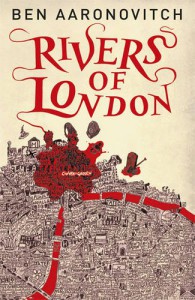 Peter Grant is a newly qualified copper, in the London Metropolitan Police Force, and after chance conversations with a ghost and a strange DCI, he finds himself assigned to DCI Nightingale's mysterious magic division rather than the expected Case Progression Unit (paperwork team). Before he knows it, he's an apprentice wizard, living in a strange, spooky, and underpopulated house, getting ready to solve the kind of crimes that the Met would probably have nightmares about – so far, so very Harry Potter. Except this isn't Harry Potter (as Aaronovitch drops into the novel a couple of times). Instead it's much less Five Go Mad in a Castle with Spells and more Law & Order: Special Magic Unit, but more fun.

Published as Rivers of London in the UK and Midnight Riot in the US presumably to avoid it being shelved under Physical Geography, UK, each title represents one of the two major investigative storylines of the novel. In the first, represented by the US title, Grant and Nightingale are investigating the sudden flurry of unexplained violent murders, all of which leave a hint of maniacal laughter for those who can detect such things. In the second, Mother Thames and Father Thames are kicking off for something of a turf war. Magical and powerful they may be, but the Met can't have them causing trouble in London. Grant will need to find a compromise to keep both sides happy.

In fact neither title/storyline combination really does the book justice. The central character of the novel is London itself. Anybody who has lived in London, visited London, or even just had a hankering for London, will enjoy the feel of the city and it's inhabitants – I enjoyed it every time I recognised streets I had walked down, buildings I had passed by, and restaurants and pubs I had eaten and drunk in. As a resident himself, Aaronovitch's fondness for the great city comes out in almost every page, but always with the deprecating sarcasm that Londoners might like to feel they own. At the same time, Aaronovitch is building his magical world: overlaying it on both the city and the story. Cleverly, we learn the rules of this world at the same time as our hero Grant, so we are always learning just enough to keep it making sense, but not so much that the novel becomes a huge information dump of magical rules.
Tweet