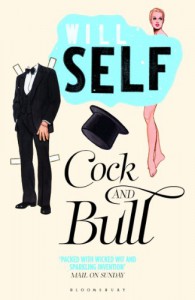 [b:Cock and Bull|15991921|Cock and Bull|Will Self|https://d202m5krfqbpi5.cloudfront.net/books/1346885000s/15991921.jpg|1411140] is two independent stories back to back; connected through their core theme of an person who develops secondary genitalia, of the opposite gender. I didn't read them back to back – instead I read the first story, Cock, during a slow period in a non-fiction book on English grammar and then picked up the second story, Bull, a week (and two further books) after that. Both are typically Selfian; brutal tales of abuse, gender stereotype and role reversal. Both are set against tales of depressing characters and backgrounds where the change is a catalyst to allow the protagonist to break free from that world to either damage, or be damaged by, those around them.

The first, Cock: A Novella, is the story of an unhappy relationship – a drunken meeting at university leads to an increasingly alcoholic marriage – and the effect that relationship has on both Carol and Dan. Carol is a put-upon wife who settled for Dan because she assumed she couldn't do any better. He was the first (and only) man to every make her cum so she married him, but it never happened again. Dan is a dick. A figurative dick rather than a physical one. As they shamble through their marriage Carol slowly develops her secondary genitalia: a penis. Obviously this starts to change the dynamic of their relationship as Carol discovers a new, and totally different, personality as well.

The second, Bull: A Farce, is the story of John Bull, a man's man, a sports writer forced to write the cabaret column in a local rag. Unlike Carol's, Bull's secondary genitalia appears overnight; a fully-formed vagina on the back of his left knee. Also, unlike Carol, he takes the sensible decision to actually see a doctor about it (although he believes it to be a cut and/or burn sustained while drunk). The story follows the paths of John Bull and Alan Margoulies (yes, try saying that name out loud), his doctor, as well as a small supporting cast (including the awful comedian, Razza Rob, who we are led to believe is the cause of Bull's condition).

The narration style is unusual in the first story, but seems to work quite well: the unnamed narrator is a (presumably) Jewish guy on a train who is being told the story by a university don he met in the carriage. The don is relating the events as if a story he heard or an investigation he was involved in. At times the story jumps from the lives of Carol and Dan to the events in the carriage and then back again. Towards the end the don falls into some awkwardly anti-Semitic rants against the narrator (who I assume represents Self) which felt very out of place in the novella – and was what lost it the one star.
Tweet