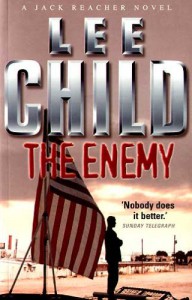 Prequel time. Rather than Reacher the wandering loner, [b:The Enemy|3056089|The Enemy (Jack Reacher, #8)|Lee Child|https://d202m5krfqbpi5.cloudfront.net/books/1328645105s/3056089.jpg|224289] gives us Reacher the army man; Reacher the Major; Reacher the Military Policeman. Long before the events of the previous seven novels (and referred to obliquely in at least one of them) Reacher got involved in something while he was an MP Major and had to take a demotion as a 'punishment'. This is the story of that something.

Reacher has been transferred back from Panama to a nowhere base in North Carolina. His transfer papers signed by General Leon Garber (another name from a few of the previous novels). Before Reacher can speak to Garber about that though he's transferred out to Korea himself. In fact Reacher isn't the only investigator MP that's been brought back from Panama and left effectively unattended as he discovers. More complex than your usual [a:Lee Child|5091|Lee Child|https://d202m5krfqbpi5.cloudfront.net/authors/1377708686p2/5091.jpg] novel, there are multiple stories going on that all, eventually, tie together – more of less. The political story of who authorised the transfers, the secret meeting agenda (there's always a written agenda) is one story. The death of the General Kramer and the murder of his wife on the same day (that seems like too much of a coincidence) is the second story and the first case that Reacher finds on his plate. The murders of the two special forces guys is a third thread (and the second case). And finally, we get to find out a lot of Reacher's family history in the fourth story about the terminal illness of his mother who lives in Paris. All in all a lot to keep track of, but it's handled well. There are a few 'yeah right' moments that are obviously in there to expedite the story, but the pace lets you forgive them mostly.

I was left not quite sure who the titular Enemy was supposed to be though. The murderer(s) that he's tracking down seems too obvious. The political shenanigans that goes on within the military that treats careers as more important than soldiers lives and tries to stop Reacher 'doing the right thing'? The change in the enemies of the US – with the former Soviet cold war situation falling apart – means that Reacher is already starting to think, and talk, about possible redundancy? Or just the old enemy of Death, the shadow over both the Reacher brothers as they worry about their mum?
Tweet