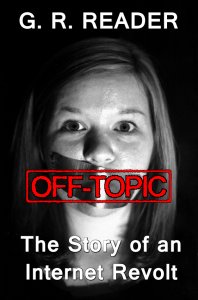 An impassioned plea for Goodreads to stop the madness. To stop arbitrarily deleting 'reviews' just because they aren't simple book reports. To stop changing the rules of reviewing without actually telling Goodreads members. To stop refusing to explain, discuss, or entertain the possibility that they might have messed up a bit here.

What started as a "complicated prank" has become a collection of essays, deleted reviews, parody reviews, personal stories and saddest of all goodbye letters. Exposing and discussing the censorship, the inconsistency and even trying to drill down into some of the data to see if there are any patterns (spoiler: there doesn't seem to be). The ebook is available from Lulu for the cost of production only, also some contributing authors have posted free to download links for the book. Download and read – it won't take that long.

I have voted for this book as a write-in vote for the Goodreads Choice Awards 2013 in both the Non-Fiction and Début Goodreads Author categories. Apparently Goodreads uses the average rating of the book to 'weigh' the validity of write-in votes (presumably as part of their decision to censor those votes - but I digress) so I've also rated the book five stars. I encourage others to do the same (even if you feel the need to re-rate the book after the awards have closed).

I leave the final word to the (former) owner of Goodreads:

"I hope you’ll appreciate that if we just start deleting ratings whenever we feel like it, that we’ve gone down a censorship road that doesn’t take us to a good place." — Otis Y. Chandler, Goodreads CEO