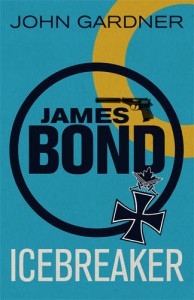 So, I relented and gave Gardner another chance. After the frankly disturbing end to the previous Bond novel, For Special Services, I was tempted to walk away but for pennies plus postage for an almost-new copy of Icebreaker at least I'm not really bumping his sales directly. The Gardner run has to end eventually (he did write 14 of these things) and another (read: hopefully better) author will take the reins – or maybe he's improving with time?

And, maybe, just maybe he is ... It starts with a good start, some solid functional scene setting and then straight into the action. Bond finds himself drawn into the ongoing operation Icebreaker. Given very little briefing by M he's on the Finnish/Russian border with a Russian, an American and an Israeli. It starts to sound like the beginning of a joke, but the jokes come later once Gardner gets going – really the idea of small group of Finnish Nazis rising again to try and take on the world seems laughable – although at least there's no goose-stepping. The number of double-crosses and double-double-crosses is insane, and while it's not overly confusing you do soon start to assume that everybody is going to change sides at least once during the book. The language is typically wooden, jumping between dialogue and third-person mid conversation, in a way that just feels stupidly clumsy.

But while it's far from a great book, it's not a bad Gardner Bond. There are definite signs of improvement here. I feel like we've turned an important corner. Most of the misogyny appears to have gone, although again Gardner seems to spoil that win somewhat by making Bond suddenly some kind of male incompetent, unable to decide which woman he loves/trusts implicitly or which woman he no longer loves/trusts implicitly. He completely loses any ability to form objective judgements of those he's working with – especially the various women – gone is the decisive Bond who trusts no one and instead he can't even be bothered to order simple background checks preferring instead to "uhm" and "ahh" his way through each character assessment. In fact, Bond appears to be the only spy in the game who isn't living up to his mistrust quota. The others seem to be acting out some pulp Mafia story rather than pretending to be professional spys. At the first opportunity Bond is over-sharing with the wrong woman when he should be getting his mistrustful spy on instead.