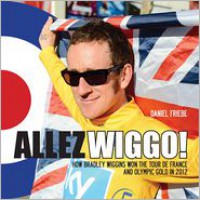 Managing to not be a book about the tour, nor a Wiggo biography, nor even a team sky brochure. Instead it comes across as a fan's scrapbook built throughout Wiggo's 2012 year of domination. His "annus mirabilis". Much of it feels superficial, while the challenges to Wiggins's successes are mentioned, they are glossed over – the spat with Chris Froome is discarded as Froome merely being "off script", the media blow-up after Le Equipe's "UK Postal" headline and the subsequent twitter frothing is simplified to a simple reaction to an accusation rather than addressing Wiggins's potential responsibilities to answer what was an obvious question after the recent years of disappointment by cycling's heroes, Cavendish's sacrifices are mentioned but the reality of the world champion being sidelined wasn't really explored, even the WAG spat is trivialised to avoid the real frustrations that were behind those tweets. To an extent much of this makes some sense, this is an ode to Wiggo and his successes not a story of the Tour or of Team Sky. Other people are only mentioned in so far as they directly impact or affect that, but it leaves you feeling a little short changed. I had expected more from Friebe after reading his Cavendish biography, [b:Boy Racer|8470902|Boy Racer|Mark Cavendish|https://d202m5krfqbpi5.cloudfront.net/books/1320438213s/8470902.jpg|6877771], and had been looking forward to his Merckx biography, [b:Eddy Merckx: The Cannibal|15747813|Eddy Merckx The Cannibal|Daniel Friebe|https://d202m5krfqbpi5.cloudfront.net/books/1342087201s/15747813.jpg|19164682], too...

Having received this book for Christmas, it was interesting to end up reading it now. After Wiggo's 2012 "annus mirabilis" – the book covers his early season successes, his Tour de France win and his Olympic gold medal, but was obviously published too early to cover his Sports Personality of the Year award and eventual knighthood – last year, 2013 has been his annus horribilis as illness and poor form has plagued the first half of his year and he's had to watch team mates taking the wins he probably would have felt he deserved himself. It was good to remind myself what he was capable of though.
Tweet